Lamb of God’s guitarist Mark Morton puts together an array of battering ram tracks that gives him a chance to shed some light to the world of his gift, and that gift is the gift of music.

Morton collected some of his good friends to participate on his release “Anesthetic” for an anthemic beast of a record.  With names of Bennington, Shaddix, Lanegan, Chuck Billy, Myles Kennedy, Morales, Josh Todd, and Blythe added to the brilliant sound it is evident that this release covers so much ground. Plus it gives him the opportunity expand his diverse guitar skills.  So this release has some real bangers to them but it also has some really catchy tracks in them. Some real ass shaking tracks! (listen to “Axis“)

It was nice to hear Chester Bennington‘s voice again and along with Morton’s heaviness. It is a really beefy track. Plus Bennington really made this song shine. “Sworn Apart” which features Papa Roach’s Jacoby Shaddix is one of the most catchiest tracks on this release.  Jacoby and Morton should record much more together. This track has so much chemistry in it.  One of the heaviest tracks on this release is “The Never” which features Testament’s front-man Chuck Billy.  Billy’s voice alone lets you know its gotta be bad ass. But matching it with Morton’s fierce riffs gives it the full picture. It is indeed a moshable track. Please don’t play this song in your house as you be looking for something to break! 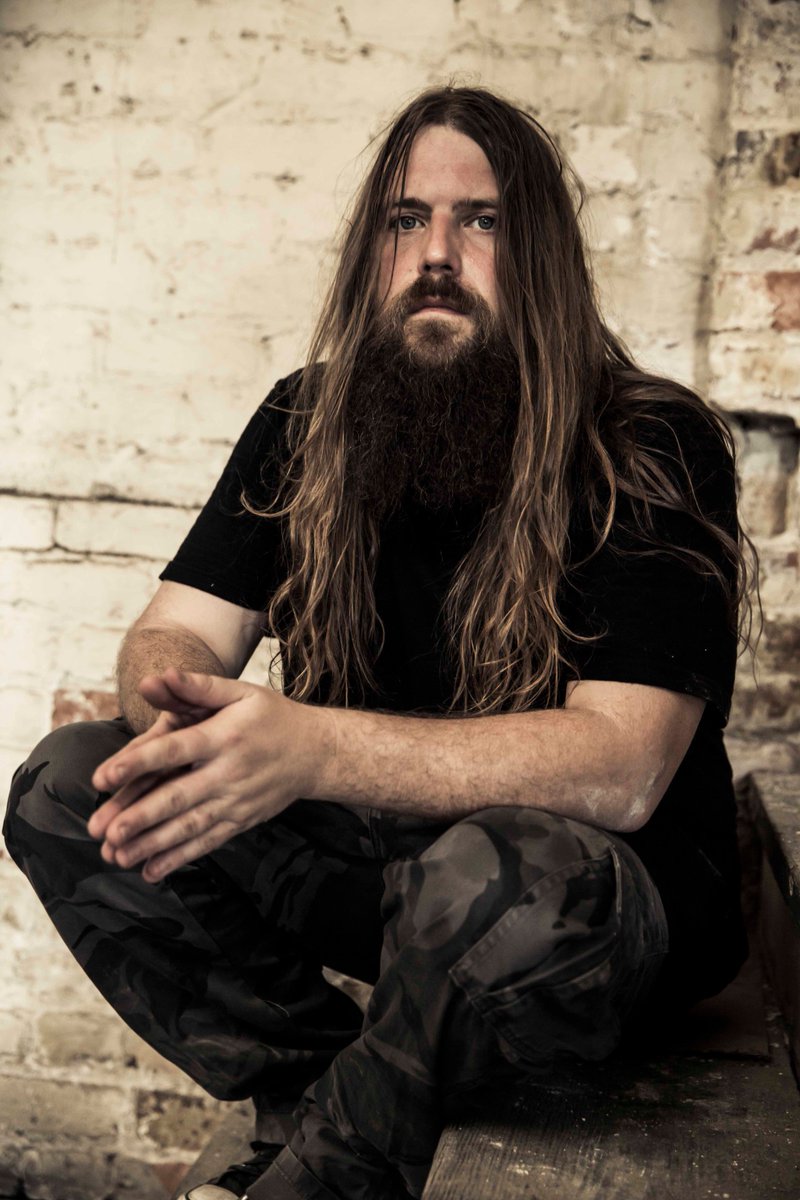 Alter Bridge’s Myles Kennedy adds his thumbprint to this release with the track “Save Defiance.” This song is definitely ready for radio airplay. It has all the makeups to a successful song.  It has a gripping riff, catchy chorus, Kennedy’s voice really makes this track pop out.  You’ll be humming along with it by the end of the song.

Son’s of Texas’ front-man Mark Morales pulls duty on the track “Blur.”  This is a pretty groovy, smooth track with a nice taste of heavy ambience and is blistering solo. Morales add the depth to this track with his deepened voice. This track will definitely have you bobbing your head up and down and have you lipping the “can’t let go.”

Josh Todd (Buckcherry) tosses his voice in on the release with “Back From The Dead” and it is so nice to hear him sing something that has some balls to it. He bring this flavorful song to the forefront as a catchy and hooky track. Ah for a nice change of pace he adds Naeemah Maddox to this release. Her sweet voice brings flair to this release and really makes it diverse. It definitely was not expected but does make the record stronger indeed. This track “Reveal” contains a dynamic array of vocaling and melody lines and shows the emotion in the song.  All I can say about this track is “Nice!.”

Morton’s old friend Randy Blythe adds his zest to this release with the track “Truth is Dead.” Aliss also add her voice to it as well. This duo really makes this track an exciting and blistering.  I great way to end this record.

Anesthetic proves that Morton has a lot to share with LOG fans and breaking through to a new arena creating new fans who are unaware who he is. It is packed with great artists and covers so much heavy stylings.  Morton is on to something here with this release and is evident that we will be hearing much more from him down the road.  Would be great to see him take this on the road.

A little bit about the making of this release

Spend time talking to Mark Morton about his creative process and two themes emerge. One, he loves to write. The Lamb of God guitarist says, “I’m a musician, I’m a songwriter, I’m a guitar player, and I’m a lyricist.” Two, Morton is inspired by a wide swath of musical genres.

For his new project Anesthetic, Morton didn’t sit down this year and say I want to write a solo album. Instead, he’s actually been writing some of this debut for years. “This album wasn’t a concerted effort to start something outside Lamb of God,” he explains.  “Music is always in my head, and until I write and record it, it’s stuck there. But once I record it, it’s out. It’s a catharsis, more for my own sanity.”

Morton is always creating: even when he isn’t writing lyrics, he’s thinking about writing lyrics. He writes on tour and he writes at home.  Whenever something hits him, he jots it down: the notes section on his phone is jammed with song ideas and lyrics.  Every time he hears or reads a turn of phrase, he takes out his phone. And it would be a mistake to pigeonhole Morton’s music taste as strictly metal.  He’s always been inspired by all kinds of music, but his biggest inspiration comes from music “with a groove and undeniable head bounce that elevates your heart rate and gets you excited.” That’s why Morton cites not just Slayer and Metallica but Biggie Smalls and Public Enemy as influences.

One of the biggest influences for this latest project, though, was longtime Lamb of God producer Josh Wilbur. He’s worked with the band since 2003, but since then he’s worked with everyone from Steve Earle to LCD Soundsystem. After Morton played Wilbur some of his demos, Wilbur encouraged him to record it for release.

When it was time to assemble musicians forAnesthetic, Morton had a choice: he could ask friends to play on it—people who knew his style and work ethic—or he could assemble a dream team, many of whom didn’t know Morton and some of whom had never even heard of Lamb of God. Morton did both.  He cites two albums as reference points: Slash’s first solo album and Dave Grohl’s side project Probot, in which both men used artists they admired to play on their tracks. Morton’s project, too, is a collaboration of highly respected musicians.

Anesthetic is a diverse body of work under the rock umbrella. There’s alternative, metal, and thrash. Morton wrote most of the music, but all of the songs feature co-writes. The Josh Todd song “Back from the Dead” is a good example of how that process worked. With those songs, Morton says, “I wrote the music first knowing that I’m leaving space for the vocals.  Once the song established itself, Josh (Wilbur) and I talked about what kind of song it was and who would sound good on it. What kind of voice is this song asking for?” Morton knew that Todd was the perfect match for this song. “It’s a high energy song, kind of cocky,” he explained. Morton sent Todd the music. Ten minutes later, Todd responded via text: I’m in.

The musicians on the album will all tell you how easy Morton was to work with.  Much of this has to do with Morton’s creative philosophy in the studio: he wanted each song to play to the artists’ strengths. He never asked the artists to do anything too different from what they were familiar with. (That meant no double kick drum pedal for the Black Crowes’ Steve Gorman.)

As one of Morton’s “favorite living drummers,” Gorman was at the top of Morton’s list.  He sent Gorman the demos, and Gorman loved them. Admittedly, he had never heard of the band, and his first response was, “Are you sure I’m the guy you’re thinking of? But then I realized that if this guy is in a metal band, he must be doing something different.” Gorman says that working with Morton “couldn’t have been easier.” Morton made it clear that “we were there to do what we normally do, and to just do our thing. It really removed the pressure.” As for the sound? “The fact that I’m involved should dispel any possible sense that this sounds like what he normally does,” Gorman points out.

Josh Todd was impressed with Morton’s songwriting ability, in particular how Morton writes songs for a vocalist. “Mark knows how to write a great song with a structure that sets a singer up. He made it easy for me to write lyrics and melodies. In other cases, I’ve gotten songs that are in such disarray that I have to sift through it to get a structure in my head.” Morton’s, he said, were already well thought out. The lyrics, Todd said, practically wrote themselves.

Longtime friend Mike Inez needed no prodding when Morton reached out. “Mark called me when I was in the car in LA with my wife. He didn’t have to ask twice.” Morton originally asked him to play on one track, but Inez insisted on more, so you can hear him on half the album. Like Gorman, Inez appreciate the space that Morton gave his players.  “This isn’t really Lamb of God stuff at all. Mark stretched out. It was a smart move to just tell us to be ourselves, rather than calling us in and telling us what to play.”

Looking back, though, perhaps Morton’s fondest memory of Anesthetic is the song “Cross Off,” his collaboration with the late Linkin Park vocalist Chester Bennington. The song features Bennington on vocals, Morton on guitar, Paulo Gregoletto on bass, and Alex Bent on drums (Gregoletto and Bent arethe rhythm section of Trivium). “Chester was one of the world’s most amazing vocalists and an incredibly creative force. I just hope that ‘Cross Off’ celebrates that fact,” says Morton.

“Cross Off” was the first time Morton and Bennington had worked together. It was also the first time they had ever met, but you’d never know it from the immediate bond between the two.  “We spent the first two hours in the studio talking about things not even related to the project, things like our kids, family, stuff like that. Making music is very personal, so there must be a degree of trust between the artists,” says Morton. The time the two spent together before recording “Cross Off” cemented that trust and made the process almost effortless.  Honest feedback was easy—and surprisingly easy, stresses Morton, considering they had just met. They spent the studio time testing out new ideas on each other. “It was an open creative process. There were no bad ideas. That’s what I hold on to. There was no ego to Chester. And I know for a fact that he loved this song,” Morton remembers.

Morton is excited to see this project come to fruition. He says that even if this project never saw the light of day, it would’ve been worth it. But make no mistake, Lamb of God fans, because that band is still Morton’s first love. Says Morton, “I’m behind Lamb of God 100%, of course. That’s my job, and that’s my priority. But I had the opportunity to write and record with some of my friends and idols and to build new relationships with people like Josh and Myles. What musician wouldn’t want to do that?”