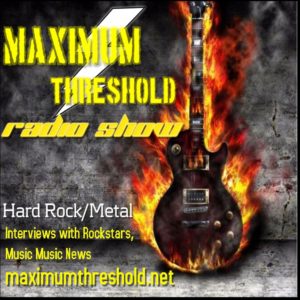 Maximum Threshold Radio is a rock & roll vibe and sometimes comedy site/station which has been dedicated to presenting up and coming  bands, current successful bands as well as brings you some of the biggest names in the entertainment industry every week for interviews. Everything from Rock Stars to Comedians to Actors and others. MT Site also provides an Entertainment twist which covers numerous avenues. From Movies, Concerts, Sporting Events, MT will cover it and bring it to you. MT has recently developed MT TV to bring you a visual version of entertainment.

MTR works with hundreds of publicists, thousands of artists and entertainers and numerous venues across the country in the promotion of events, entertainers, and their venues.

MT has its own radio show which is live every Saturday night from 8-11pm ET, which is also an internationally syndicated program which is aired either live or replayed in 53 markets/stations around the world. MT Show can be heard on both terrestrial radio as well as net radio. Maximum Threshold are currently developing a record label and public relations arm.  MT has been broadcasting and producing for over 15 years.